The introduction of the JSON data type in MySQL 5.7, and the subsequent improvements made in 8.0, have opened up a lot of new possibilities in how to store data in your web apps. The traditional approach of database normalization is widely taught in school, but is not always the best approach.

Let’s start by looking at a common business object in most web apps, the User profile. We will see that using a hybrid approach, traditional single-data columns with an additional JSON column, has many advantages.

Suppose we want to store the following data in our user profiles:

Using a traditional approach to store this in a relational database, you might create a User table with separate columns for each of the fields. You would then create 3 one-to-many tables to store the user’s addresses, favorite movies, and favorite quotes.

Using the hybrid approach, you will separate out all the “miscellaneous” data into a details object which might look something like this:

Now you only need a single table to store your data and it will be much simplified. It will consist of the core/critical data in traditional columns, and a JSON column to store all of the ‘details’:

Advantages of the Hybrid approach

The virtual weight column uses MySQL’s JSON path syntax to extract the weight field from UserDetails and store it in a separate column. Our application does not need to worry about managing or updating this new column, MySQL handles that automatically! We than create an index on the virtual column.

Because the UserDetails class is essentially a Java bean and is converted to JSON when stored, we can add some very useful methods. For example we can add a method that gets the user’s primary address:

When we store a User with multiple addresses into our database, the result looks something like this:

We can see that MySQL took care of populating primaryAddress for us, and it can now be used for querying and indexing!

I hope this at least makes you think more about your database design instead of jumping straight into normalization.

In part 2 we will show the Hibernate/Jackson-JSON code that accomplishes all of this in more detail. But if you can’t wait, as always, you can find the full source code on GitHub.

In part 2, we get into the nitty gritty details of how to implement the hybrid approach.

Why you should avoid a release strategy involving client-specific branches. 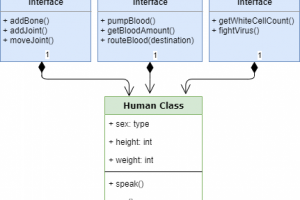 Why you should favor composition over inheritance

Composition vs inheritance. Some improvements in Java interfaces that make composition much more powerful!