Before Wicket 8, and before Java 8 introduced lambda expressions, you were pretty much forced to use the PropertyModel. Through the magic of reflection, PropertyModel is a very compact and simple way to specify your models for fields without having to write verbose code.

Let’s look at a simple example for a TextField that captures a user’s name, and a ListMultipleChoice for capturing their favorite movie genres. You might do it this way using PropertyModel:

The above code is very simple and compact, but it’s difficult to maintain, error prone, and can’t take advantage of modern IDE refactoring tools because it relies on strings.

Modern IDE’s also provide great tools for searching for references, which is very helpful when dealing with large code bases. If you were to search for all references of User.getDisplayName(), the IDE would not be able to see that PropertyModel reference.

You can solve pretty much all of these problems by replacing each instance of PropertyModel with custom implementations of Model, but that would lead to very verbose code. There is a better way!

Using Wicket 8 LambdaModel‘s, we can keep all the benefits IDE’s offer us and maintain code compactness. First, we need to define a few helper functions that we will put into an interface that WebPage‘s will implement:

We can now update our Wicket fields to use the new models. As you can see the code is almost the same and just as compact:

I think PropertyModel’s were a necessary evil in previous versions of Wicket, but now that better alternatives exist, you should definitely replace them.

In general, it’s a great idea to create helper methods like the above, to isolate the usage of specific Model implementations. This makes it much simpler to make changes in large code bases as new versions of Java/Wicket continuously get released.

How to dynamically choose the implementation of Wicket panels when adding them to your page using reflection and the factory pattern.

How to create a Wicket button component to prevent users from clicking buttons multiple times in succession. 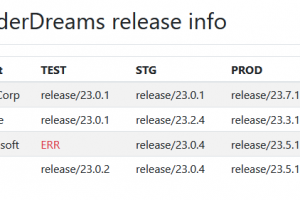 Are you deploying different versions of your software to multiple clients with test, staging, and production environments? Are clients picky about features they want to release to each environment? Let's create a dashboard to keep track of all of this.